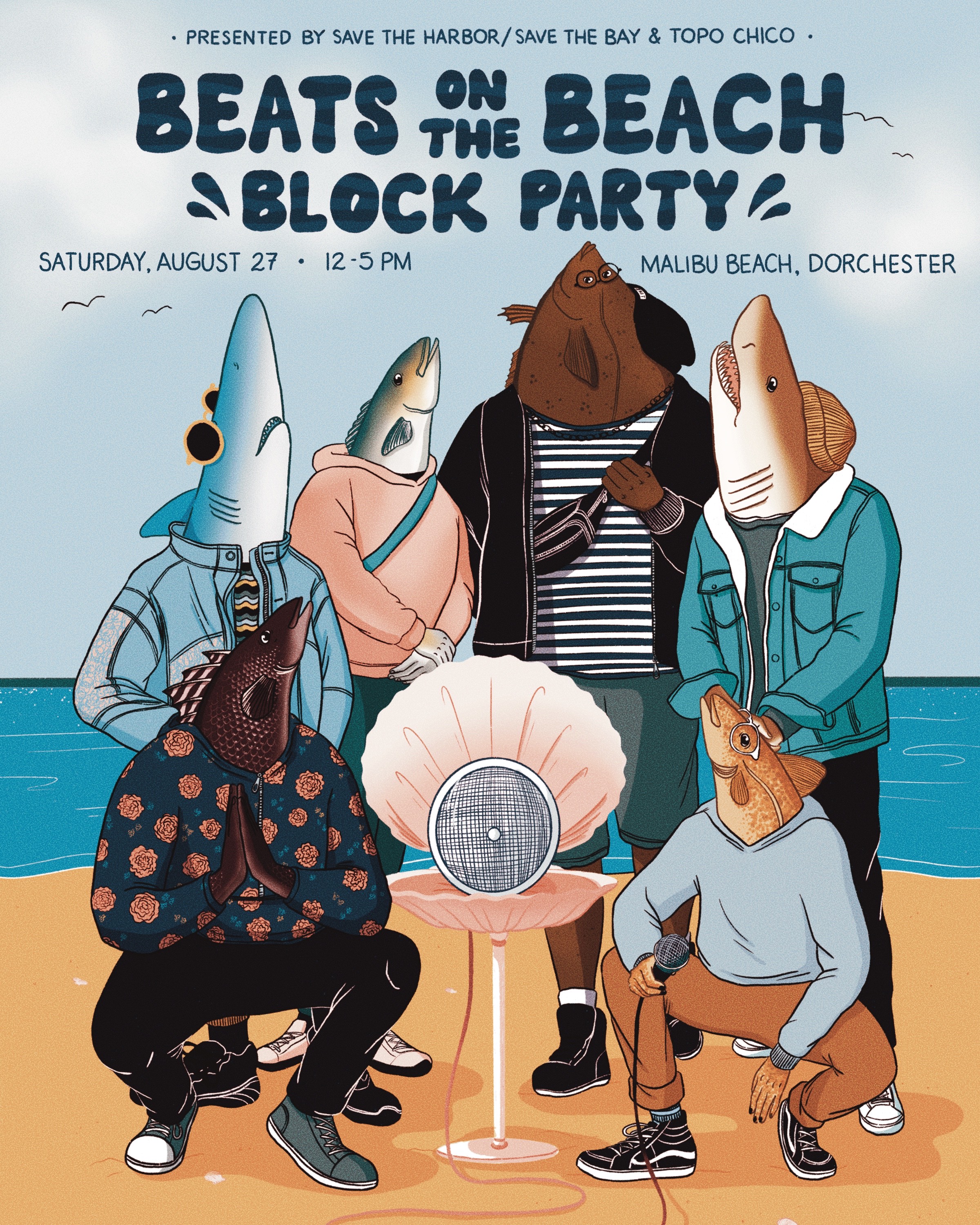 By Lower Mills DorchesterAugust 25, 2022No Comments

On August 27th, award-winning local musicians will take to Malibu Beach in Dorchester to put on a first-of-its-kind free music festival, sponsored by Topo Chico and Save the Harbor/Save the Bay. Celebrating Boston music, the Beats on the Beach Block Party is bringing local musicians, food, artist vendors, and music lovers together on one of the region’s cleanest urban beaches. This event is free and open to all ages, with no ticket required.

Beats on the Beach started in 2020 by Rilla Force and LDER as a community music contest. Each year, two featured producers create sample packs for contestants to use to create their own beats, and a featured producer chooses the winner. This year, local producers Dephrase and Lightfoot collected audio samples from Malibu Beach. The featured producer, Leo the Kind, will choose a winning beat and add vocals to make a completed, collaborative track. Acclaimed Boston musicians and members of Beats on the Beach including Leo the Kind, Lightfoot, Rilla Force, Dephrase, LDER, and ximena will be performing at the Block Party, alongside Beats by Girlz Boston house DJ 1800shortking, and The Hip Hop Transformation.

This year’s Beats on the Beach featured producers will also be headlining the concert. Leo the Kind, a Dorchester native, won the Boston Music Award for Pop Artist of the Year in 2020. His success doesn’t stop there, with his music being featured in a 2021 Nike commercial and millions of streams on Spotify. His music is a fusion of electronic, pop, R&B, alternative, rock, funk, and more, creating a unique, signature sound easily recognizable to Boston music fans.

Lightfoot is a producer and beat maker from Boston. In 2019, he won the Boston Music Award for Dance/Electronic Artist of the Year and has been nominated for Boston Music Awards five years in a row. His music has been heard in the halls of the MFA and other prominent venues in Boston, including Boston Symphony Hall.

Dephrase is a local producer and engineer. They own Ugly Duck Studio and are known for their duo, Optic Bloom. The duo has been nominated for Boston Music Awards and was featured in Boston Music Award’s “Ones 2 Watch” music series.

This free event is made possible by a grant from Save the Harbor/Save the Bay’s Better Beaches Program partnership with the Department of Conservation and Recreation (DCR). This year, Save the Harbor let the community decide how to invest $25,000 in Better Beaches funds in a participatory budgeting process that generated more than 200 ideas. Over 600 people voted for their favorites, with the Beats on the Beach Block Party being a winner. This is part of Save the Harbor/Save the Bay’s effort to promote diversity and inclusivity on and around Boston’s public beaches.

“It’s really important to Save the Harbor to make sure that there are free opportunities to come and utilize the beaches that belong to our community members,” said Maya Smith, Partnerships and Program Development Director at Save the Harbor/Save the Bay. “This is one example of over 150 events that are happening this summer to make sure we are helping to bridge the gap between community members and the spaces that we all share ownership of.”

Ludjy Derisier, aka LDER, is a Haitian-American music producer and Beats on the Beach program coordinator. “I’m so excited for the beats on the beach block party because it’s the culmination of three years of hard work,” said Derisier. “I’m glad that we’re putting an event together that is not only for musicians but for the people in the communities that support them.”

Joshua Major-Paschal, aka Rilla Force, is a three-time Boston Music Award nominated artist, producer, DJ and Program Coordinator of Beats on the Beach. “Save the Harbor gave us an opportunity and the tools to help out our community, and plan our event in the peak of the pandemic, even going as far to continue their support years after,” said Major-Paschal. “Their grant program has done so much good for LDER and I, local businesses, individuals, and so many others since we’ve become grantees. Beats on the Beach and the block party wouldn’t be the same without their help.”

At the event, free drinks will be provided by Topo Chico and the Pull Up Food Truck will serve Latin and soul food by the beach. Local artist vendors will sell clothing, accessories, crystals, pottery and more. There will also be free dragon boat rides courtesy of Ohana New England. Save the Harbor/Save the Bay would like to thank our event sponsors: Topo Chico, Newbury Comics and iZotope, Inc. To learn more about Beats on the Beach Block Party, visit https://www.savetheharbor.org/botbparty.

Beats on the Beach Block Party will take place at Malibu Beach in Dorchester on August 27th, from 12:00 PM to 5:00 PM.